In 2021, there were 1,376 reported tornadoes in the United States, including a December 10 series of tornadoes in the Midwest that cost 90 lives. That series of tornadoes ranked fifth in the Top 10 Costliest U.S. Catastrophes Involving Tornados for estimated insured losses, according to the Insurance Information Institute. Tornadoes can and do occur anywhere in the country, so it’s important to know why they form and how damage is assessed.

According to the National Weather Service, tornadoes are violently rotating columns of air touching the ground, usually attached to the base of a thunderstorm. For a vortex to be classified as a tornado, it must be touching both the ground and the cloud. In order to keep going, they need a source of imbalance, such as heat or moisture, combined with rotation (vorticity). Tornadoes dissipate when either instability or vorticity is removed.

While tornado activity isn’t confined to a single season, it peaks between March and June. However, tornadoes can and do occur year-round and commonly spawn from landfall hurricanes. Where and when we see the most tornadoes has to do with weather patterns and where the major systems arise in the spring and summer months. The jet stream, bands of strong winds that blow from east to west, drops down to the south in the spring. When the jet stream collides with the warm, moist air, rotation and tornadoes can occur within a supercell.

Tornado intensity is rated by the Enhanced Fujita (EF) Scale, which assigns ratings based on wind speed and degrees of damage to 28 indicators, including different types of buildings, structures, and trees. For each indicator, several degrees of damage are identified and sequenced from barely visible to complete destruction. Tornadoes are categorized from EF 0 – EF 5.

While the winds on the EF Scale are derived from scientific study, they are still only estimates for several reasons. Nobody knows the “true” wind speeds at ground level for most tornadoes. The amount of wind needed to do similar-looking damage can vary from building to building. Experts assessing reported tornado damage to residential structures review a variety of data points, including from NOAA and the National Weather Service.

Strong winds apply wind loads to structures that attempt to resist them. More intense winds produce a stronger wind load. Winds affect a structure from the top down, applying the strongest wind loads to the roofing elements and proceeding toward the foundation. Complete destruction occurs when the structure can no longer resist the applied load. 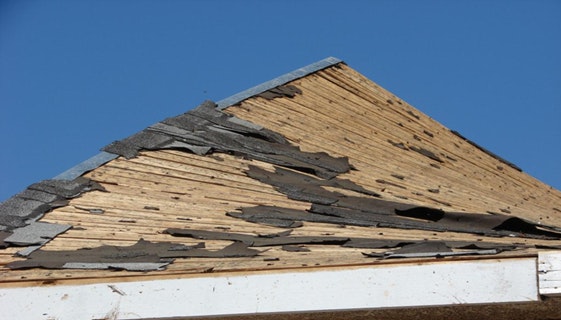 Wind loads typically first affect the top of a structure, starting with the roofing material, and go down.

Applied wind loads are transferred throughout the building’s elements to the foundation and, finally, to the ground by way of the load path, which runs from the building surface through the structural system to the foundation. Structural failure due to wind load can be facilitated by a weak link, or discontinuity, in the load path. Discontinuities include cut nails instead of anchor bolts attaching the sill plates to the foundation, marginal anchoring of the roof structure to the top of the walls, and inadequate nailing of the wood roof decking or framing.

While knowing the wind speeds and classification of a tornado is a necessary starting point, determining what damage resulted from a tornado requires careful field evaluation. So much of how a structure weathers a tornado depends on the structure itself.

How Can a Tornado Destroy One House and Leave the One Next Door Intact?

﻿Tornado damage can seem inconsistent, even within a neighborhood. There are a few possible explanations for this. The first is a multiple-vortex tornado, which can cause only minor damage to a house before smaller embedded vortices apply more intense wind damage to the house next door. 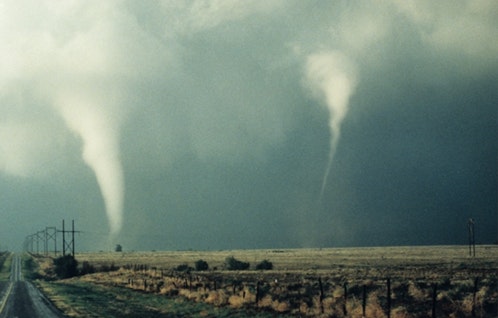 A multiple vortex tornado can cause inconsistent damage within a small area. (NOAA Images)

On neighboring houses, the difference in damage can also be attributed to the type of house, type of construction, quality of construction, and distance from the tornado path. Debris impact can cause a failure in the building envelope and then result in more substantial damage to one house than another nearby.

Submit a project to see how Donan experts answer questions about the cause of tornado damage or provide other mechanical, electrical, and structural solutions.