Frost Heave: Cause, Consequences, and Prevention

Water expands in volume by about 9% when it freezes, according to the International Association for the Properties of Water and Steam. When water in soil freezes and expands, the ground and structures within and on it move as a result of the pressure it exerts. This movement is called frost heave. The concept of frost heave is simple, but the damage it can cause is anything but. Understanding how frost heave affects building components is important to identifying and addressing damage before it spreads to other parts of a structure. 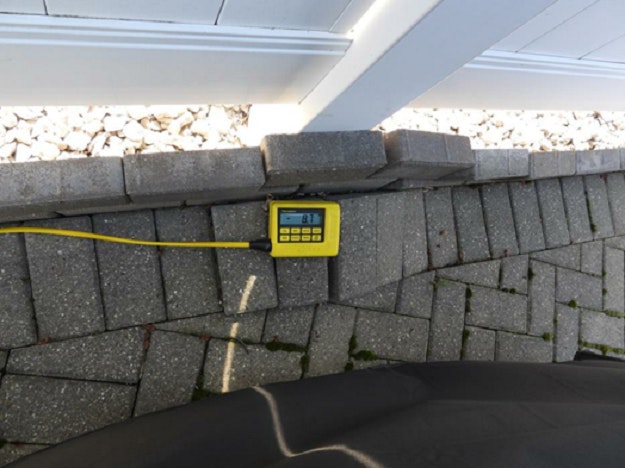 Driveways, foundations, floor structures, and brick pavers such as these are among the components vulnerable to displacement from frost heave.

When water freezes in the soil, the ice underground grows vertically toward the colder temperatures, in the direction of the heat loss, through capillary action. The ice then forms a lens-shaped area beneath the surface that can result in vertical pressure on foundations or slabs. 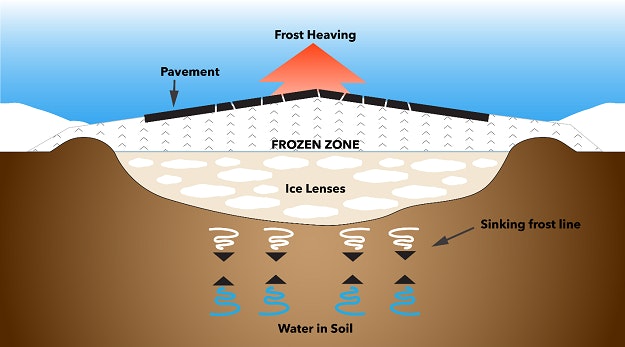 For frost heave to occur, three conditions must be present. First, the soil must have a continual source of water. Second, a sufficiently cold climate is necessary to allow freezing temperatures to penetrate below the surface. Third, the soil material must be susceptible to lens formation. Freezing temperatures must penetrate into the ground for a sustained period of time for the ice lens to form. Fine, silty soils are most likely to allow this development.

With structures, problems occur when water gets into, under, or beside building components, such as footings or basement walls, and then freezes. Damages can also occur when water saturates porous objects, such as the face of soft bricks, before freezing. Repeated cycles of freezing and thawing can weaken building materials and decrease the load-carrying capacity of the subgrade. 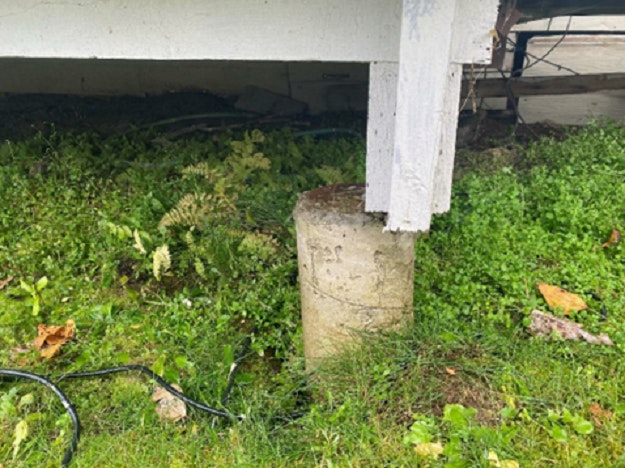 Repeated frost heave can cause building materials to move under pressure, such as the displacement of this footing away from the post above.

As with almost all structural damage, more fragile and lightly attached building components are the first affected by frost heave. Elements of a building at or below grade are always more vulnerable. This includes concrete floor slabs, block basement walls, foundation footings, and pavement.

Even after the ground thaws, components affected by frost heave are unlikely to return to their original positions. This is due to soil that sloughs during the thaw and fills the space that shifting materials leave empty. As a result, continued freeze/thaw cycles can produce a “jacking” effect, which may result in supporting components’ failure or collapse. If not addressed, these issues will quickly spread to the rest of the structure.

Building codes vary by state, but all include language to ensure that structures address “frost depth” to combat these problems. Frost depth is the depth in the soil, in inches, below which freezing will probably not occur. Obviously, this measurement varies widely throughout the United States based on historical climate records and research. Adherence to regional building codes helps protect a structure against the effects of frost heave. 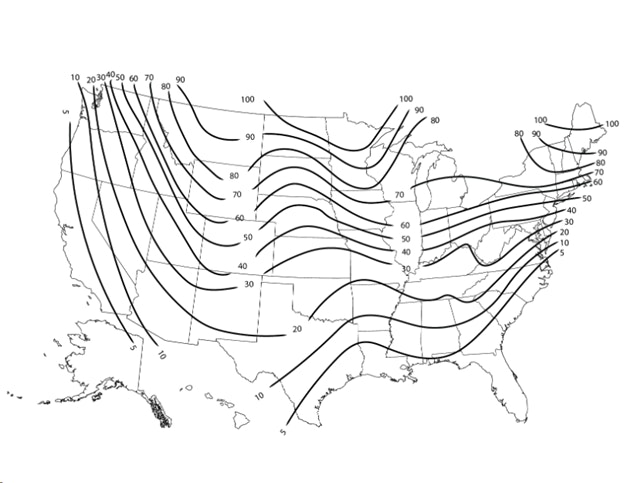 Regional frost depth is one factor that should dictate the materials, construction methods, and design of compliant structures. (Based on data from the United States Department of Commerce)

Because a continual source of water is required for frost heave to occur, building codes also address ground slope and drainage. When the soil beneath a shallow foundation becomes saturated, conditions are favorable to the water freezing in the winter and causing further damage.

Gutter and downspout systems should direct water runoff away from the foundation to prevent sufficient water buildup to cause settlement or frost heave. Most building codes require a slope of 6 inches in 10 feet to keep water from collecting near the ground-level building components. This means that within 10 horizontal feet from the edge of a structure, the elevation should be 6 inches lower than it is at the base of the structure.

Once frost heave affects a building, it’s important to diagnose the issue immediately to prevent further damage. Donan’s professional engineers can determine the cause and extent of a frost heave loss through an investigation rooted in the scientific method. Their expertise and experience also allow them to make necessary repair recommendations to ensure the structure is returned to code-compliant condition.

Submit an Assignment to see how Donan experts answer questions about frost heave damage or provide other mechanical, electrical, and structural solutions.