A storm showered the southwestern United States in unprecedented snow and ice. Afterward, Mr. Michael Phillips* noticed that his horse-riding arena’s roof was sagging. Donan Professional Engineer Jeff Miller was called in to inspect the arena and determine if its structural integrity had been affected by the weight of snow and ice. As he took some photos of the structure and its roof, Mr. Phillips’ horses checked him out from across the arena.

During Jeff’s interview with the property owner, Mr. Phillips told Jeff that he’d built the arena himself and had hired a local fabricator to make all the metal components from the columns to the roof panels. Farmers can erect many of their own buildings without permits or consulting a structural engineer. Jeff admired the quality of the steel and Mr. Phillips’ welded connections. However, Jeff quickly questioned the sizes of some of the structural steel members considering the spans between the columns – which can have a profound impact on how much weight a roof can hold. 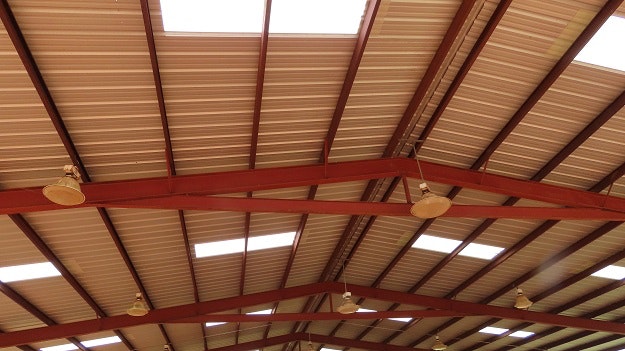 The size and spacing of the beams, purlins, and braces are critical to the performance of the structure.

The size and spacing of the beams, purlins, and braces are critical to the performance of the structure.

The stringline method for finding the amount of sag in the roof – deflection, in engineering terms – is simple but effective. Jeff attached the end of a brightly colored string to a rivet in the central eave of the roof, strung it toward the ridge, and pulled it taut. He measured the space between the roof and the string; if the roof hadn't bent under the weight of the snow, the string would have laid flat against the panels. Jeff's measurements indicated clear deflection in every bay of the roof. That in itself still did not answer the question of whether the recent snowfall was the cause, or if the roof sagged for another reason. 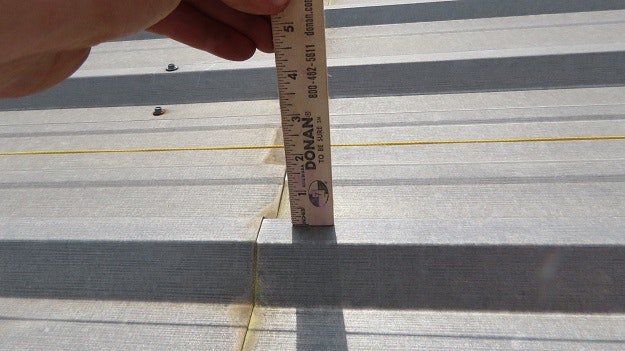 This roof bay shows deflection of more than 2 inches.

This roof bay shows deflection of more than 2 inches

After the inspection, Jeff consulted the National Oceanic and Atmospheric Administration’s (NOAA) historic weather data, noting that the nearest weather station had modeled approximately 6.5 inches of snow depth. The density of snow varies widely from snowfall to snowfall, commonly ranging from 5 percent to 20 percent of the density of liquid water, making it difficult to determine the weight of snow from simple depth measurements. Liquid water is known to weigh 62.4 pounds per cubic foot; therefore, engineers commonly use the Snow Water Equivalent (SWE) to determine the weight of a given snowfall. The SWE is derived from the amount of liquid water in the snow, provided in inches. In this case, the SWE was about 1.3 inches at most. This depth of water over a one-square-foot area weighs 6.7 pounds, therefore, the estimated snow load for the property was about 6.7 psf.

While 6.5 inches of snow is substantial for this part of the country, the structure itself should have been able to hold much more weight. The International Building Code (IBC) requires a roof to support at least a 20 psf live load, which would have exceeded the snow load in this case. If the structure were designed and constructed to meet building code requirements, the roof would have been capable of bearing the snow from the recent storm with no resulting permanent deflection.

The roof sagged after a historical snowfall, but Jeff concluded that the actual cause of loss was inadequate construction. The observed sag with no imposed loading indicates that the roof sagged under its self-weight, or that the minimal snow load caused permanent deflection. Either way, the deflection was excessive under the given circumstances. The roof structure required temporary shoring and repairs to be made safe for use. Ultimately, a licensed design engineer would be able to recommend the necessary repair plan.

*All names outside of the Donan organization have been changed.

Jeff Miller, P.E., joined Donan in 2020 and currently serves as a Forensic Engineer based out of Denver, CO. He began his engineering career in 2015 and has worked in civil and structural engineering. His areas of expertise are blasting and construction activity damage, concrete construction/design, construction defects, and structural failures, among others. 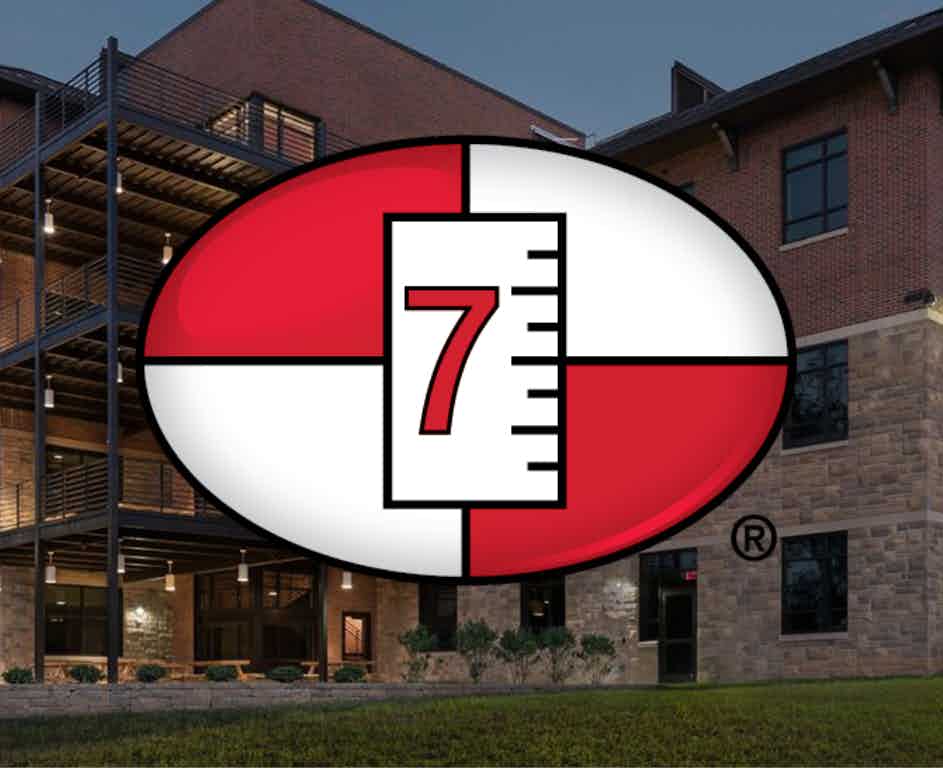