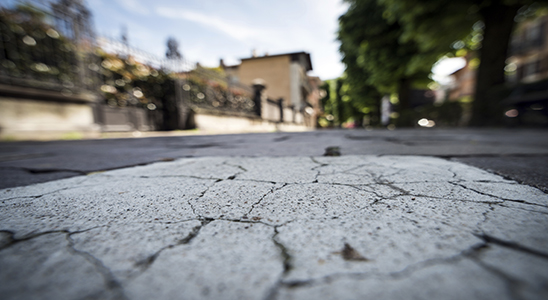 Cracks in pavement create a blueprint for future repair

Oftentimes people turn a blind eye to driveway deterioration, and, like the roads, bridges, and utilities we use every day, we don’t fully appreciate them until something goes wrong.  As driveways age and weather takes its toll, hairline cracks begin to form in the pavement. Over time, dirt and water fill these cracks, causing them to deepen and expand.  Due to the manner in which they are constructed, driveway repairs or replacement can be extremely costly and time consuming.

Below is an overview of the most popular driveway materials and some of their common issues.

Portland Cement Concrete (PCC), commonly referred to as concrete, is one of the most prevalent driveway materials.  PCC is a mixture of aggregate (stone fragments), Portland cement, and water that is typically mixed in the truck on the way to the jobsite.  Concrete is usually placed in forms that constitute the edges of the driveway.  Concrete driveways can be reinforced with rebar or wire mesh, but this is not always the case. The concrete is finished by hand and can be stamped and/or stained to create a more refined look. 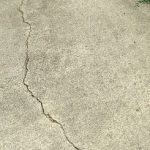 Common problems that arise with concrete driveways include: cracking, flaking of the surface, and aggregate pop-outs.  Cracks in concrete slabs can be caused by plastic shrinkage (usually shortly after the concrete is placed), drying shrinkage (caused by too much water in the PCC), settlement due to a loss of underlying support, heave due to cold conditions or swelling soils, overloading, scaling due to freeze/thaw cycles within the concrete (usually in the presence of de-icers), and vibrations.  Collateral damages to more susceptible building items will occur long before the more-robust concrete pavement will sustain vibration-induced damages.  Some of these cracks can be controlled with the use of control joints, and a lack of sufficient control joints will typically result in cracks that can be an eyesore. 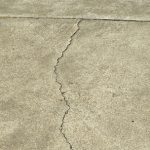 Cracking due to a lack of control joints.

The National Ready Mixed Concrete Association (NRMCA) has long recommended a maximum control joint spacing of 2.5 times the concrete slab thickness in inches (4 inches x 2.5 = 10 feet).[1]  NRMCA also recommends that panels be as square as possible (length not to exceed 1.5 times the width), and that “L”-shaped panels should be avoided.  The depth of the control joints should be one-fourth the thickness of the slab (not less than 1 inch).  This gives the concrete a place to crack, since we know it is going to crack.  Aggregate pop-outs occur due to the use of sub-par aggregate and can be triggered by vehicular traffic and the use of de-icers.

Hot Mix Asphalt (HMA), more commonly called asphalt, is another popular driveway paving material.  HMA is a combination of different-sized aggregate and liquid asphalt cement, and occasionally other materials like sand and reclaimed/recycled asphalt pavement.  The HMA is mixed at an asphalt plant at temperatures over 300 degrees Fahrenheit and transported to the jobsite.  HMA is laid with a paver and is compacted with vibratory and/or static rollers.  Forms are not necessary for asphalt pavement, nor is the use of reinforcement.  The proper preparation of the base materials is, however, very important since HMA relies on underlying materials for strength as it supports the applied loads. 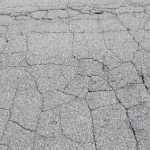 One of the go-to resources for asphalt pavement problems is the Asphalt Institute.[2]  Common issues with asphalt pavement include: fatigue (alligator) cracking, longitudinal and transverse cracking, reflective cracking, slippage, shoving, rutting, settlement, and potholes.  Alligator cracking is typically due to excessive loading; a weak surface, base, or subgrade; poor drainage; or any combination thereof.

Other cracks can be caused by poorly constructed pavement joints, asphalt shrinkage, and cracks from support materials reflecting through the HMA. 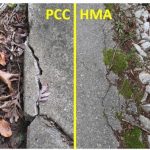 One of the most common driveway distresses is edge cracking.  Edge cracks are due to lack of lateral support, settlement of underlying material, shrinkage or drying out of soil, weak base or subgrade layer, poor drainage, frost heave, or heavy traffic along pavement edges.  Most people don’t realize the importance of backfilling against the edges of their driveways, but failure to do so will almost always result in cracked pavements.

A pothole is not an actual distress itself, but rather is the result of continued deterioration of another type of distress.  The severity of the distress and traffic loading accelerate damage to the asphalt pavement when potholes are present.

As with most man-made structures and materials, proper construction and maintenance of driveway pavements are critical to a driveway’s function and appearance. Whether concrete or asphalt, driveway repair can be costly.  Many people shy away from replacing their driveways, choosing to instead patch cracks and trouble areas. While this is more cost effective in the interim, it can lead to additional problems down the road.  The decision to patch or replace a driveway requires careful consideration, and in the end, personal preference plays a significant role.

Matt Richardson, P.E., C.M.I, joined Donan in 2005 and currently serves as a forensic engineer and principal consultant based out of the firm’s Knoxville, Tennessee office. Read more about Donan’s Forensic Engineering Division here.