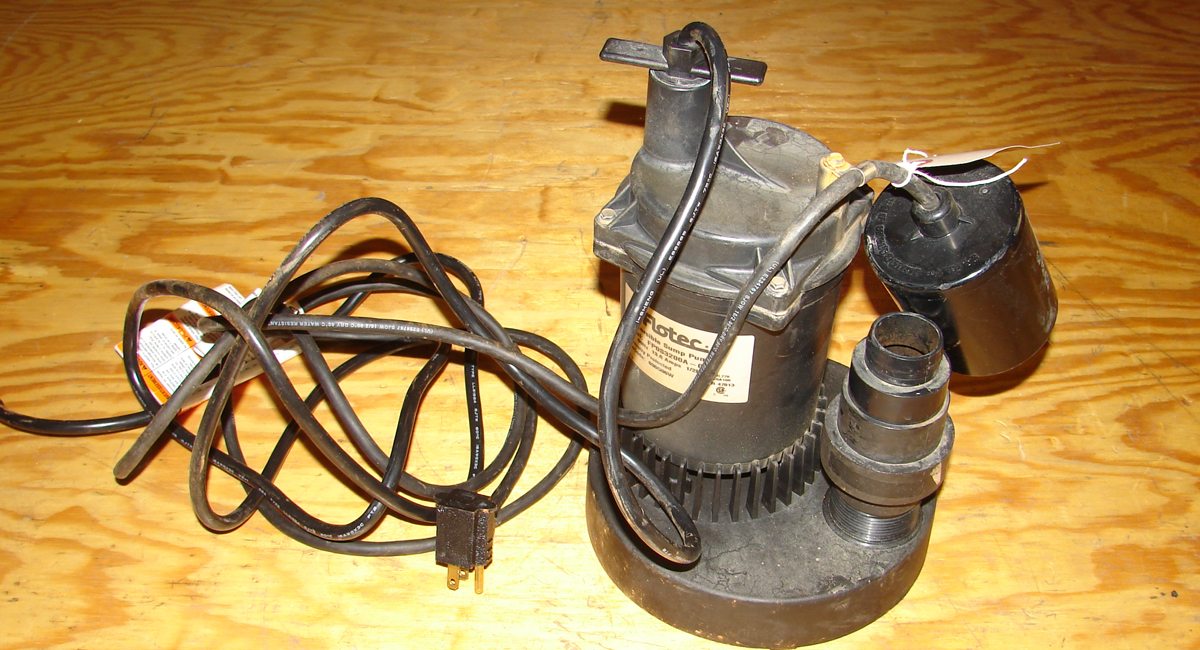 Sump pumps are becoming more common household appliances.  Urban sprawl into areas that are hilly, have high water tables, or are trying to separate from combined sewers are examples of how sump pumps will be more prevalent in the future.[1]  This article will give a brief overview of sump  pump types, sizing, and key installation issues for proper pump performance. 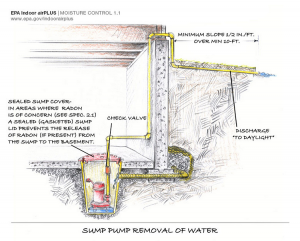 The two common types of sump pump are a pedestal type, commonly called a column pump, and a submersible type.  The difference between the two is the location of the motor.  The pedestal pump’s motor is above the sump, and it has a long drive shaft that connects the motor to the hydraulic portion, where the impeller is located.  The submersible pump is much shorter, the motor is located directly above the hydraulic portion, and it can be submerged without damaging the pump. 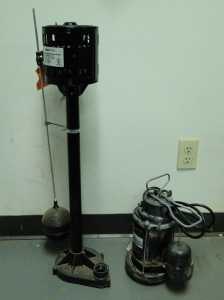 All sump pumps use switches to monitor the water level in the sump basin and determine when to turn “on” and “off.”  There are many different types of switches available, and each type has its advantages and disadvantages.  A popular type of switch is a tethered float switch.  This switch has a float that raises and lowers with the water level and has the internal electrical contacts inside the float housing.  A very similar type of switch is the vertical float switch, which also uses a float to activate and deactivate the pump; however, the internal electrical contacts are often integral to the pump housing and not in the float.  Another type of switch is a diaphragm switch, which uses hydrostatic water pressure to deflect a rubber diaphragm and activate internal electrical contacts.  A very important part of the diaphragm switch is the vent tube, which is often located in this switch’s power cord.  This vent tube permits atmospheric pressure inside the switch housing, and the switch will not function properly if the vent tube is clogged.

New advancements with more sophisticated switches that measure the conductive or capacitance of water have been introduced into the sump pump market.  However, their relatively high cost may reduce their staying power.  With capacitance switches, the probes need to be clean and can be sensitive to buildup associated with waterborne mineral deposits.  The buildup of waterborne mineral deposits can form a barrier on the surface of the probe, prohibiting the switch from activating at the appropriate water level.  The buildup of waterborne mineral deposits, if it is thick enough, can also retain water behind its surface, causing the probe to sense water when there is none in the sump, resulting in the pump running continuously and overheating. 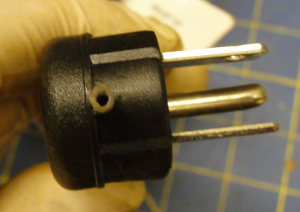 Commonly, sump pumps are sized according to horsepower, with the plumber’s experience being the most important factor in sizing the pump.  However, technical guidelines for sizing sump pumps are based on estimating the flow rate and head requirements (total dynamic head) for the installation.[2]  Estimating the flow rate is based on the square footage of the basement where the sump is located and the type of soil, either sandy or clay.  The head requirement for the pump can be calculated by measuring the static head, friction head, and operating head.

The static head is the elevation difference between the water level in the sump and the highest point in the discharge pipe.  The friction head is based on the total length of the discharge pipe and the number of fittings.  The operating head is the pressure at the point of discharge, which is atmospheric pressure for most installations.  The flow rate and the head requirements are then used to select a proper sized pump using manufacturer’s pump performance curves.[3]  Pumps that are undersized may not be able to remove enough incoming water from a rain event, which is an installation error. 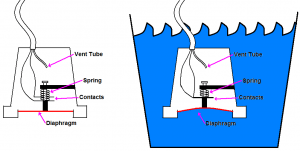 Figure 4: Diaphragm Switch out of Water (left) and in Water (right)

When reviewing sump installations, there are five key components that need to be addressed: a ground fault circuit interrupter (GFCI) outlet, debris in the sump, whether there is a check valve, whether the float is free to travel, and whether there is an air-release hole.  A GFCI outlet is common in bathrooms and kitchens in the United States.  A GFCI outlet will stop itself from being energized when electricity is sensed on the ground plug of the appliance.  The ground plug is connected to the appliance chassis and is common on metal appliances for safety issues.  A GFCI outlet is required by the National Electrical Code (NEC) for sump pump installations.  A pump with a tripped GFCI outlet will not function, which may be related more to the GFCI outlet than to the pump’s functionality.

Debris in a sump can clog the pump inlet, reducing the pump’s capacity or jamming the pump impeller, resulting in what is called a “locked rotor” condition.  A basin made of appropriate material (i.e., plastic or concrete), and a cover will help reduce the amount of debris in the sump.

A check valve is installed in a pump discharge pipe to stop the flow of water back into the sump when the pump has stopped activating.  This will help prevent the pump from having a rapid cycling situation, in which it is constantly pumping water that is flowing back from the discharge pipe.[4]  Rapid cycling will decrease the life of the pump switch.  A check valve is required by most sump pump manufacturers and by plumbing codes.[5]  It is important to retain the check valve when analyzing a sump pump installation or, at the very least, to record its existence with a photograph.

Figure 5: Green Check Valve in the Above

The float needs to be reviewed to make sure that it is free to travel.  Obviously, this issue is not important for pumps that incorporate a switch which does not have a float (see Figure 4).  However, floats are the most popular method of controlling a sump pump.  If the float contacts the sump basin when it is initially installed, it may operate properly; however, over time, due to the buildup of waterborne mineral deposits, the increased friction may cause the float to hang up.  This can result in the pump not activating when it is supposed to or the pump running continuously, which will shorten the life of the pump.  Floats should always be free to travel while the water in the sump rises and lowers.  Shortening the tether length is not a good solution to the problem because usually the manufacturer has already specified the tether length at the minimum specification.  Commonly, a float switch minimum tether length is 3 ½ inches.[6]  Float switch cords lose their ductility over time and may not activate at a shortened length.  Heat, associated with a pump running for relatively long durations, will accelerate the float switch cords’ loss of ductility.

An air-release hole is a critical component of a sump pump that is often overlooked; it is important to have on pumps that have their inlet oriented below the impeller at the bottom of the pump.  With a properly installed check valve, water is retained in the discharge pipe so that it will not flow back into the sump.  Water in the discharge pipe is very heavy.  When the sump is empty (i.e., during a time period without rain), air will enter the hydraulic portion of the pump.  When water does fill the sump (e.g., during a rain event), the sump pump needs to be primed, meaning the air needs to be removed from the hydraulic portion of the pump.  In order to allow the air to evacuate from the hydraulic section, an air-release hole is needed.  If the air is allowed to remain in the pump, the pump impeller will spin in the air and not have enough force to lift the flapper in the check valve, and the pump will not remove water.  The pump no longer operates as a pump and now will operate more like a fan, which is known as an air-locked condition.  A pump in an air-lock condition will have increased wear associated with its shaft seal.  Manufacturers with bottom inlet designs often recommend that an air-release hole be drilled in the discharge pipe below the check valve to reduce the chance of an air-lock situation.[7]  Not drilling an air-release hole when appropriate is an installation error.

A sump pumps is a very useful appliance that helps to maintain a dry basement.  A properly installed and maintained sump pump should provide at least 10 years of worry-free use.[8]