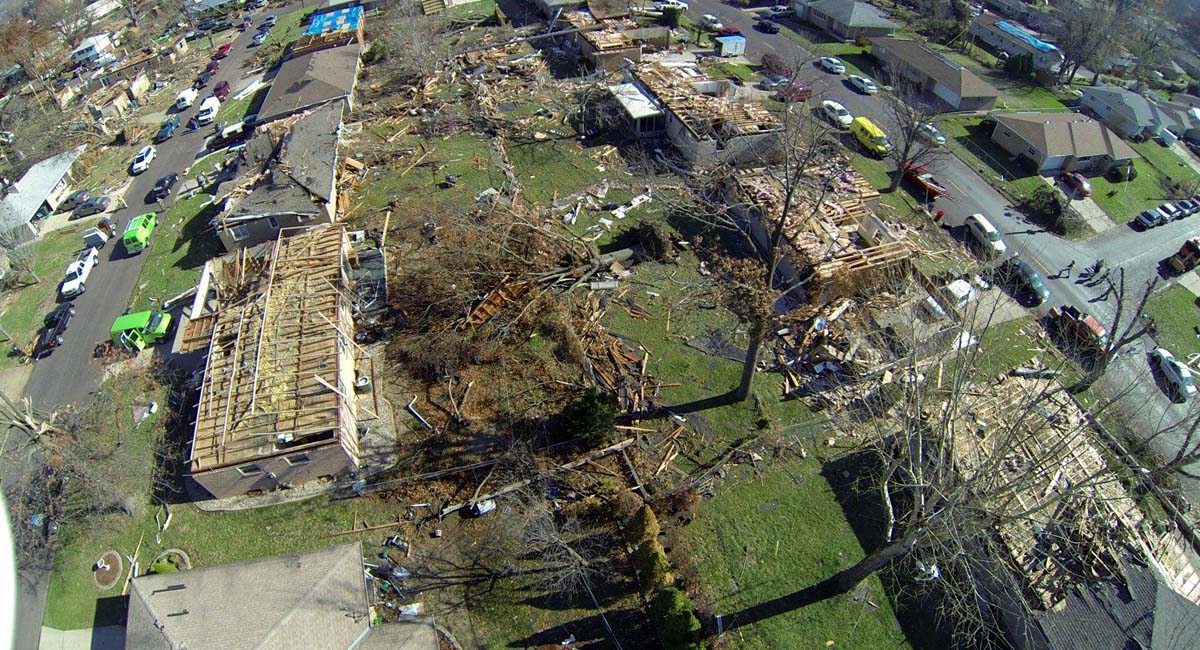 After a tornado event, devastation and destruction are found along the tornado path.  Due to the wood-framed construction predominant in Texas and Oklahoma, extensive damage to a house can occur.  But how do you know whether visible cracks in the Sheetrock or brick finishes are just cosmetic damage or the signs of structural failure? 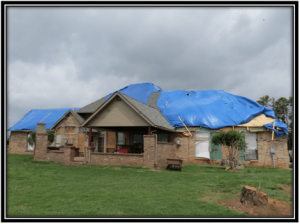 During a tornado, the winds that encounter a house are deflected over and around it.  Positive (inward) pressure is applied to the windward walls, and negative (outward) pressure to the side, leeward walls and roof.  The tornado is a dynamic and moving event; several walls of the house become the windward wall as the tornado moves.  The other primary effect of the wind is internal pressurization.  A breach in the exterior envelope due to broken windows, doors, or roof may cause an increase in the pressure acting on the building.

The roof framing is more susceptible to damage, followed by the wall framing, and then the foundation.  Gable ends will be the first damaged; members can crack at the connections or detach from the wall’s top plate.  A standard stick-built roof framing will sustain more damage than a pre-fabricated truss due to the increased number of site-fabricated connections in the stick-built.  As the wind pressure “pushes” and “pulls” the roof covering, the connections in the roof framing are exposed to an increase load.  In a stick-built frame, the purlins and strut braces may fail once the push occurs.  If any of these members fails by detaching, cracking, or breaking, the rafter will be susceptible to damage as its effective length increases.  During the pulling, the collar ties might fail, and the connection of the rafters with the ridge board can be compromised.  On a pre-fabricated truss framing system, the loads are evenly distributed along the members.  Failure could occur where loads exceed design and break or detach a member from the truss plate.  Roof framing members and wood decking can also be damaged by wind-borne debris. 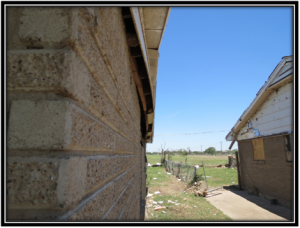 Brick veneer is prone to damage, as it is not fully supported against a flat surface.  The brick ties installed on the wall studs prevent the brick veneer from moving outward. The wind pressure applied can detach the ties from the studs, break it, or pull it out from the mortar, thereby allowing the veneer to move freely, resulting in horizontal cracks or broken bricks.  The same will be true for stone veneer.  The same force exerted on the exterior of the wall is experienced by the wall framing, which will flex to accommodate the movement.  The interior wall cover will crack consistent with the degree of movement.  The flexing of the wall framing will not compromise its structural integrity, as long as it does not pull the sole plate off the foundation or permanently deform the wall.  This can be detected by verifying the plumbness of the wall.

Foundations are the least expected to be damaged by a tornado event.  If the foundation was failing due to soil-induced movement prior to the event, the wind pressure can aggravate the condition.

The structural damage to a house can be repaired, as long as it meets current codes and city requirements.  The economic impact of an extensive repair should be analyzed to determine its feasibility against razing the structure and starting from scratch.