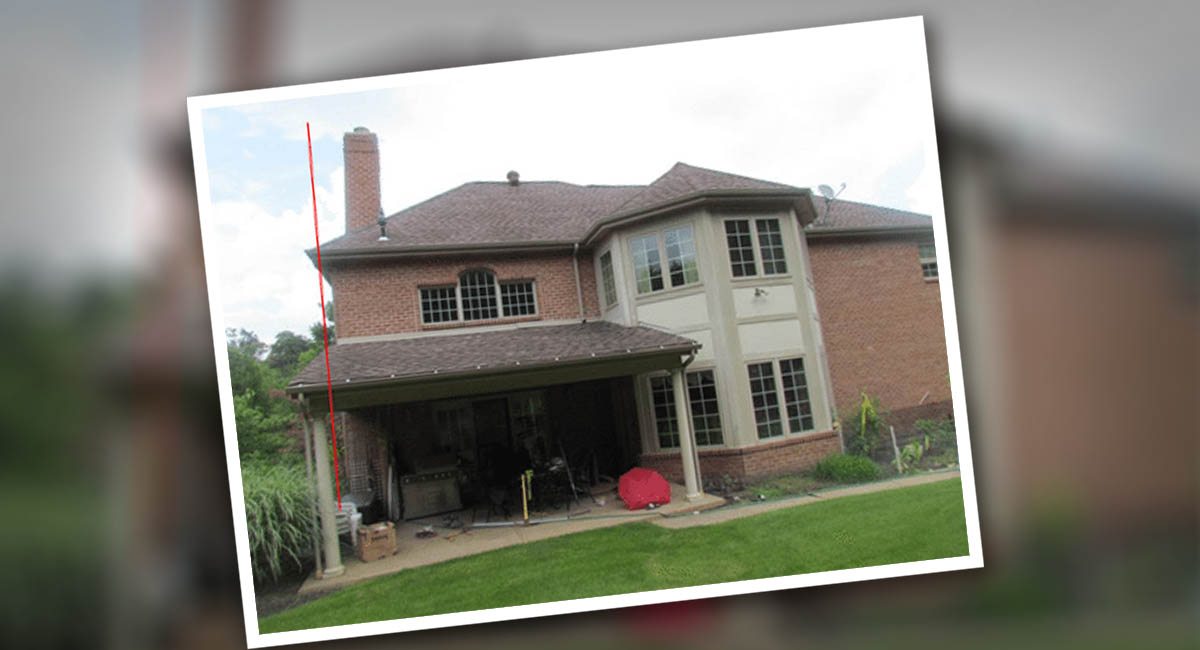 Brick masonry chimneys have been prevalent for centuries, but it wasn’t until recent decades that brick-clad, wood-framed chimneys became common in residential construction.  This trend resulted from the increasing popularity of metal insert fireplaces. While they may appear similar from the exterior, the structure and weather-resistant envelope of wood-framed chimneys are very different than masonry-built chimneys.  Prior to studying damage, it is important to understand critical elements in the structural support and weather-resistant envelope of wood-framed chimneys and the types of damage that can result from improper construction.[1] 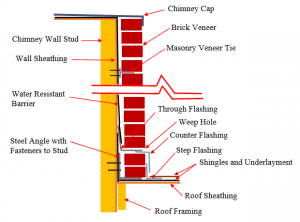 Figure 1: Detail of Flashing and Brick Veneer Support of a Wood-Framed Chimney.

To effectively divert water away from the chimney walls, the Code requires that chimneys wider than 30 inches have “cricket” roof slopes constructed between the upslope side of the chimney and adjacent roof above.  Persistent water intrusion can cause deterioration of the wood framing and connections that could result in structural failure (Photograph 1). 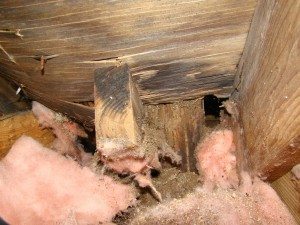 Photograph 1: Water intrusion and rot has contributed to the structural damage of this wood-framed chimney.

The Code also provides structural specifications for the support of masonry on wood framing.  A steel angle is required between the bottom of the brick veneer and the roof sheathing.  Masonry veneer ties function to connect the brick veneer to the wood-framed walls.  The required material, size, spacing, and fastening of the masonry veneer ties are specified by the Code.  The wood framing and connections of the structure must have adequate strength to transfer the weight of the chimney and brick veneer to the structure’s foundation.  Framing members with inadequate stiffness or structural capacity, and/or deterioration of the framing or connections due to persistent water intrusion can cause cracks in the brick veneer, leaning, or even collapse of the chimney (Photographs 2 through 4).

Photograph 2: Note the chimney leaning toward the right. The red indicating line is parallel to the exterior wall of the house. 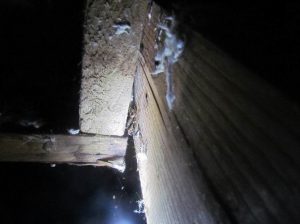 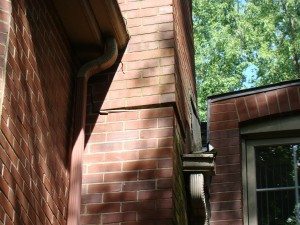 Photograph 4: Separation (indicated) of the brick veneer and leaning of a wood-framed chimney. This is the exterior of the chimney shown in Photograph 1.

In some cases, brick on one side of the chimney is supported directly by the foundation, while brick on the other chimney walls is supported by wood beams or trusses that span some distance between supports (Photographs 4 and 5).  If not properly designed and constructed, the weight of the brick chimney can cause the spanning members to sag, while the exterior wall and veneer remain unmoved.  This difference in movement of the supporting members can result in leaning of the chimney and cracks in the brick veneer.  Wood framing, particularly undersized members, progressively sag over time when supporting a constant load such as the brick veneer of a chimney.  This phenomenon, referred to as “wood creep”, can cause the leaning of a chimney to develop slowly over a period of years.  The Code specifies that the wood framing supporting masonry veneer shall be designed to limit the deflection to 1/600 of the span for the supporting members considering the weight of the veneer and all other loads.  The Code further specifies that when masonry veneer supported by wood framing adjoins masonry veneer supported by the foundation, there shall be a movement joint between these two portions of veneer.  The movement joint is intended to allow some deflection of the wood framing without producing cracks in the brick veneer. 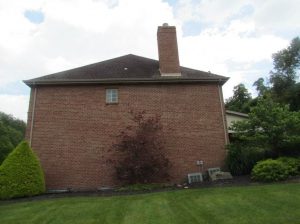 Photograph 4: The brick veneer of the exterior wall is continuous to the face of the chimney above.

Photograph 5: The brick veneer (indicated) extends from the house wall to the face of the chimney above. The other three chimney walls are supported by the long-span girder truss.

As shown in the photographs above, cracking of masonry veneer, water intrusion, and leaning or collapsed chimneys can result from improper construction of brick veneer on wood-framed chimneys.  Studying the details of the water-resistant envelope and structural support of the brick veneer is critical to accurately determining the cause of such damages.

[1] This article provides summaries of specifications in the 2012 International Residential Code for One- and Two- Family Dwellings.  Proper detailing should comply all applicable code requirements and is not limited to the summary descriptions presented in this article.