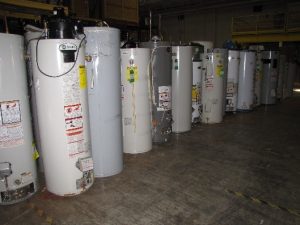 By far the most common water heater type found in American residential housing is a gas or electrically heated storage tank type.  These are relatively simple appliances and generally operate successfully day-in and day-out with little maintenance or thought.  However, like any appliance, they eventually fail and often an engineer is needed to explain why.

Water Leaks
Although water heaters are sometimes associated with other types of losses, water damage claims are by far the most common.  The most common failure is the result of a breach of the steel tank because of rusting.  Such leaks are often slow, but once they occur they are persistent and increase in volume as the hole enlarges.  It’s not possible to detect the origin of the leak since the tank’s foam insulation and metal shell will mask the failure point; thus, a destructive examination will be required to discover its origin.  Often leaks will have occurred for weeks or months before being detected by the homeowner.  The extent of wood decay and other damage produced by leaking water can be used to estimate the leak’s age. 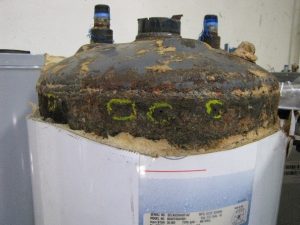 Often the cause of the tank’s leaking is the result of the complete consumption of its sacrificial anode.  The electro-chemical nature of the metals used in this passive device causes them to corrode preferentially as compared to the steel tank thus protecting the tank.  Once this sacrificial metal has been consumed, the tank will begin to rust and will eventually fail.  Many manufacturers suggest or require that owners of their products check the condition of their water heater’s sacrificial anode once each year and replace it as necessary.[1]  This may be a difficult chore for a homeowner and may require a plumber to accomplish the task.

The life of the sacrificial anode can vary greatly depending on the water supply’s aggressiveness.  Soft water, such as that found in many well systems and municipal supplies like that of now infamous, Flint, Michigan, create conditions that will cause the anode to quickly be consumed.[2]

When investigating a gas water heater failure, the homeowner should be asked if the appliance makes popping or gurgling noises and for how long.  The noises occur because of sediment buildup in the tank’s bottom.[3]  These buildups trap heat and result in localized boiling that creates telltale sounds.  If allowed to continue, the tank will weaken, rust, and eventually fail.  Manufacturers recommend draining a tank each year to remove sediments before they can build and become damaging.  Failures resulting from the buildup of sediments are the result of deferred maintenance. 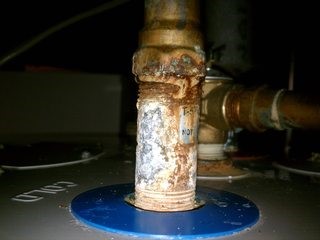 Leaking Plumbing Connections
Leaking near a water heater’s plumbing connections are often the result of dissimilar metal or galvanic corrosion that can occur.  When copper pipe or brass fittings are directly connected to the steel connections of a water heater, an electrical potential is created with the steel becoming the anode (-) and the brass or copper becoming the cathode (+).  This condition, in conjunction with an electrolyte (water), produces a flow of electrons from the anode to the cathode resulting in corrosion.  The use of dielectric connections or CPVC piping will prevent this circuit from forming and eliminate this corrosion potential.  Failure to include such protection is considered an installation error.

The water heater’s T&P valve should be tested yearly by lifting its lever and ensuring that a stream of water is immediately released.[4]  This action often will often cause the valve to drip if mineral deposits prevent it from fulling closing.  Unchecked, this leaking can lead to damage to the surrounding area.  A more insidious problem occurs when the T&P valve unexpectedly opens and discharges large quantities of damaging water.  Since these discharges are most commonly unobserved, the homeowner may be unaware of the water’s source.

Some manufacturers made electric water heaters that contain a plastic liner to prevent corrosion issues.  The liner contains the water, and a conventional steel tank provides the necessary structure to withstand the water’s pressure.  Problems arise when the water heater’s connections leak.  The leaks are undetectable because any water lost is confined between the bag and the external steel tank.  Since the steel tank is not expected to encounter water, no rust prevention measures are in place, and the tank begins to rust from the inside.  Over time the corrosion causes the metal wall of the tank to thin and lose strength.  Eventually, the water pressure in the bag causes the tank wall to bulge and fail while simultaneously bursting the bag.  A catastrophic failure then occurs and large amounts of water are quickly released.  A bulged water heater with plastic film extending from its failure location is a prime indicator of such an issue.  Even though years are required for the failure to present itself, this is a manufacturer’s defect since the cause dates back to the water heater’s construction.

Gas Water Heater Losses
Although water loss issues are most commonly associated with water heaters, gas water heaters are often implicated with fires and explosions.  Seldom do water heaters cause fires, but because they can have an open flame, the possibility exists.  Typically, any fires that have a water heater as its ignition source will also include possible damages to its controls, illegal modifications, poor maintenance and most likely housekeeping issues that have enabled the event.

Gas-fueled water heaters can also be the source of carbon monoxide poisoning.  This can be the result of an improperly installed, blocked or a failed flue.  However, they are also susceptible to producing carbon monoxide if other combustion appliances such as wood burning stoves or fireplaces are not provided with sufficient make-up or combustion air.  When this occurs, air can be drawn down through the water heater’s flue along with its carbon monoxide containing combustion gasses and into the house.  If the water heater has a standing pilot light a common sign of this condition is the need to frequently relight the pilot light.  The reverse draft caused by the other combustion appliances will often cause the pilot’s flame to extinguish.

Water heaters provide hundreds of millions of Americans with a convenient, safe, and dependable source of hot water every day.  However, they do fail and can result in large losses and inconvenience to property owners.  An expert can inspect failed appliances and their components to determine the origin and cause.

Donan’s Component Testing Lab handles over 10,000 projects a year in the largest laboratory of its kind in the nation. To learn more, visit us at donan.con/component-testing or submit a project at donan.con/portal.