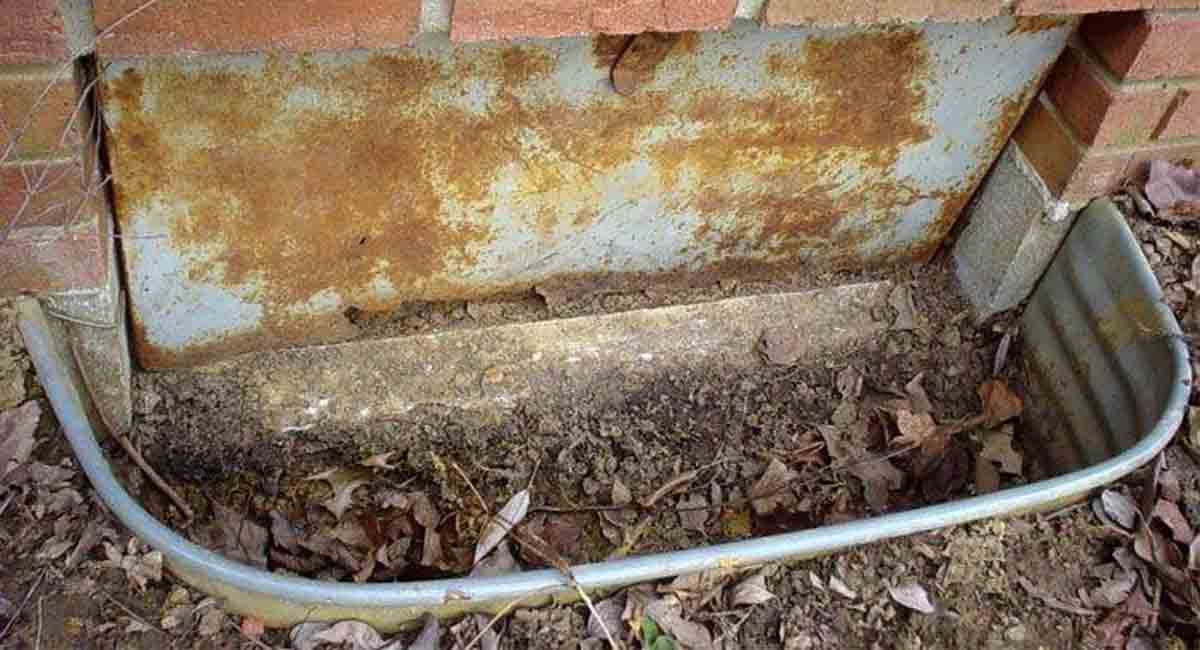 Although a house’s crawlspace is only inches away from its living space, homeowners seldom visit or even think about its condition, and this is often a very costly oversight. Granted, crawlspaces are often not very inviting with their complement of cobwebs, creepy crawlers, cramped conditions, and dampness. However, if you, or someone you can cajole, can endure a visit at least once per year, the potential savings to your pocketbook could be literally thousands and perhaps tens of thousands of dollars.

A ventilated crawlspace should be designed to allow ambient air to flow in and out of the area through its foundation vents. This airflow is intended to allow any moisture that might exist to escape into the ambient atmosphere before it can wreak havoc on the house’s structure. Often, this ventilation is poor due to insufficient openings, poorly placed vents, and/or house additions or other constructions that block off existing vents.

Unventilated crawlspaces are generally accessed from within the house and usually through a trap door in a utility room or closet. As their name implies, they do not have ventilation openings in their walls. Modern versions will typically include a vapor barrier over the earthen floor and rigid insulation covering the surfaces of its exterior walls. One benefit of an unvented crawlspace design is its cost. The amount of insulation needed to insulate a crawlspace’s walls is far less than that necessary to insulate the overlying floor structure, but it can provide an equally effective conservation of energy. An unventilated crawlspace should function and perform similarly to a basement. HVAC ducts will not normally require insulation, and the potential for pipe freezing is minimized.

Because of the insulation cost savings, a third crawlspace design is often encountered by Donan Engineering: the crossbreed. Often, a contractor will build a house over a conventional ventilated crawlspace, but then insulate its walls rather that the floor structure to cut corners and save money. Such a design can cause long-term problems and provides few benefits.

Moisture in a crawlspace generally has four sources: the inherit moisture of the soil, surface water runoff, ambient humidity, and plumbing leaks.

The amount of moisture released from the earthen floor of a crawlspace is surprisingly high. Even soil that appears dry may release several gallons of moisture in the form of vapor into the crawlspace of an average 1,500-square-foot house each day. A competent vapor barrier stretching over a crawlspace’s entire earthen floor is generally sufficient to minimize this moisture source. The inclusion of a vapor barrier in a crawlspace provides the most benefits for the least cost. Many specialty contractors offer very elaborate and well-performing vapor barrier designs that go well beyond the simple 6 mil sheet of plastic that is most commonly used, but at a significantly higher cost. 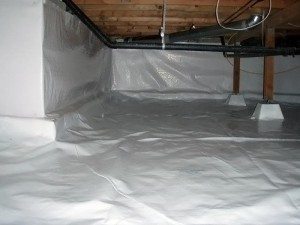 Surface water runoff is the most significant and chronic source of water in a typical crawlspace. Poor drainage of the lot surrounding the house and its crawlspace is the common culprit and is often made worse by improperly terminated gutter downspouts and adjacent impervious surfaces such as driveways and sidewalks. Concrete is not impervious, and surface water can easily seep through its mass, particularly if the crawlspace is constructed from CMUs. Crawlspaces with the earthen floor, entrance, and vents at or below the level of the adjacent grade are particularly vulnerable. Water marks and effloresce on the interior side of the CMUs are telltale signs of surface water intrusion even if the crawlspace is currently “dry.” A vapor barrier may provide some mediation of the intruding water’s impacts, but only improved drainage is a certain solution. The installation of a sump pump can also help band-aid the problem, but often their effectiveness is hampered by the uneven grade of a crawlspace’s floor and the normally difficult installation conditions. 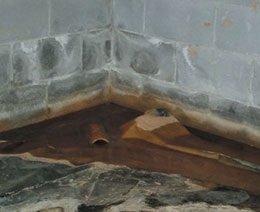 Ventilated crawlspaces allow ambient air to flow in and out. While the intent is to remove moisture from the crawlspace, the opposite can occur during hot, humid months. When the warm, humid air enters the crawlspace, it rises and accumulates below the house’s floor. If the house is air-conditioned and its floor uninsulated, condensation will often form on the wood structure. Condensation will also form on cold water piping and uninsulated HVAC ductwork. For these reasons, many houses constructed before the era of air conditioning experience moisture problems a few to several years after air conditioning is first installed, even though they had no problems for decades before. Insulation of the house’s floor, HVAC ductwork, and plumbing can help to mitigate this issue.

Often, when humidity is the problem, the underside of the subflooring will bear the brunt of the moisture’s effects. Generally, all of the subflooring will be affected, but more massive items such as joists and beams may show no issues. Corrosion and water streaks on plumbing and HVAC ductwork also will provide evidence of this issue. In some instances, one may find evidence of “rain drops” falling on the moisture barrier’s coating of dust that is produced by the condensation that drips from the floor above.

Generally, catastrophic plumbing leaks are easily and quickly detectable. Although they certainly can flood a crawlspace, their effects are generally short term and seldom result in significant damage within the crawlspace. However, often when a catastrophic leak occurs, its remediation uncovers other unrelated but serious chronic problems that a homeowner may attribute to the initially discovered issue. Generally, minor but chronic leaks, particularly in waste plumbing, cause the most severe damages. Chronic leaks typically produce problems in isolated locations, with the area below a toilet one of the most common. For a variety of reasons, a toilet’s wax seal can leak, and a few drips of wastewater are released after each flush, which is not typically noticeable from within the bathroom itself. This moisture will promote fungal decay of the adjacent wood subflooring and, over time, it will begin to sag and fail. Such chronic leaks seldom, if ever, result in widespread moisture-related problems in a crawlspace. 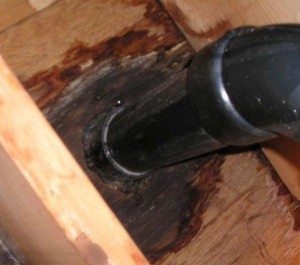 Regardless of its source, excess moisture in a crawlspace can produce significant structural damage over time. Once the moisture content of wood reaches 19 percent or above, it becomes susceptible to fungal decay or, as it is commonly referred to, wood rot. Luckily, fungal decay is a long, slow process even when provided with ideal conditions. The conditions within a crawlspace generally vary significantly throughout the year. A crawlspace may be wet during rainy months but then dry out during other periods. Similarly, humidity issues in a crawlspace are generally associated with summer months. As a result of these changing moisture conditions, the fungal decay organism may not be constantly active, and thus the amount of time for damage to occur can extend to many years, giving the homeowner ample opportunity to identify and correct the problem before serious issues arise. 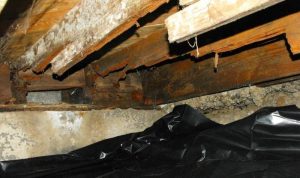 Fungal Decay Can Cost You Thousands