Background
At the end of 2016, a study for the cause of an electrocution case was assigned to a Donan electrical engineer.  The incident conditions were initially set up in the 1960s by the utility company that was giving incentives to have a dual meter installation that would disconnect a portion of the electric power to the water heater as an energy savings measure during peak operating hours of the local coal mines in the area.  The incentive was later discontinued, but the meter arrangement was not removed by the utility company in many locations.  They simply blanked off the second meter and the third conductor was connected to the two-pole circuit breaker opposite pole for the water heater, allowing the water heater to operate full time on the upper and lower thermostats.

Meter Arrangements
Typical off-peak meter arrangements are shown in Figures 1 and 2, below. 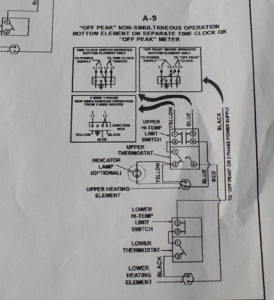 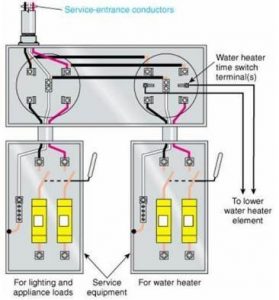 In figure 2, the meter on the left provides power for the lighting and appliance loads (Note: this could be to a circuit breaker panel main breaker in lieu of a fused disconnect).  The right-side meter provides full-time power to the upper heating element thermostat and timer-switched power to the lower heating element thermostat (where cold water enters the water heater).  The timer-switched power is interrupted during peak usage hours by the timer.  A typical meter arrangement left by the utility company is shown in Figure 3 and a 3-pole fused disconnect that is no longer used for the energy-savings arrangement shown in Figure 4 (Notice the white conductor on the third-pole fuse).

The utility company reportedly removed the dual meter arrangement at the incident location in about 2009, and a newer panelboard was installed.  The cable for the water heater is a 3-conductor, number 10 American Wire Gauge (AWG) cable without a ground.  The red conductor was connected to the top terminal of the 30-amp (A), 2-pole circuit breaker, and the black conductor and the third conductor (white) was connected to the bottom terminal at that time to allow the older water heater to operate as a standard water heater through the thermostats.  Figures 5 and 6 show the presently installed configuration.

In this case, the owner (a widow) had her kitchen remodeled in about 2011, and the old water heater was removed from thehouse.  A smaller electric water heater was installed under the corner cabinet and rewired using the old wiring during the remodeling.  The adult son later (about 2014) replaced the smaller water heater after a leak developed, using the same wiring arrangement.  Figure 7 shows the white conductor being connected to the water heater cabinet as a ground.

At the time of the remodeling, the circuit breaker would have been turned off during the installation and no problem was noticed, even though the white wire was energized when the breaker was turned back on.  When the son replaced that water heater about two years before the incident, he again turned the circuit breaker off, and no issues were noticed at that time.

At the time of the incident, he was installing foam insulation tubing over the water lines in the crawlspace.  Part of the water lines are polyvinyl-chloride (PVC) piping and part are metal.  The circuit breaker was not turned off.  The crawlspace was said to be damp and the son was electrocuted when he went beyond the PVC piping and grabbed hold of the steel water line.  Figure 8 shows the transition from PVC to steel and the location where the son had grabbed the steel water line and could not let go.

Electric shock is the physiological reaction or injury caused by electric current passing through the (human) body.  Typically, the expression is used to describe an injurious exposure to electricity.  It occurs with the contact of a (human) body part with any source of electricity that causes a sufficient current through the skin, muscles, or hair.  Very small currents can be imperceptible. Larger current passing through the body can make it impossible for a shock victim to let go of an energized object.  Still larger currents can cause fibrillation of the heart and damage to tissues.  Death caused by an electric shock is called electrocution.

An electrical injury has many consequences to a body, as the electrical currents can travel through the nervous system and burn out tissue in patches along the way.  This can leave bizarre symptoms anywhere on the body and may lead to complex regional pain syndrome.  Wiring or other metalwork which is at a hazardous voltage that can constitute a risk of electric shock is called “live”, as in “live wire.”  Shocks can be caused by direct or indirect contact.  Contact with an exposed conductive part under fault conditions is called indirect contact.  IEC requires certain degrees of ingress protection against direct contact.  Indirect contact protections can be achieved by earthed equipotential bonding and automatic disconnection of supply by using Residual Current Devices called ground fault circuit interrupters (GFCI), such as GFCI outlets or GFCI circuit breakers. 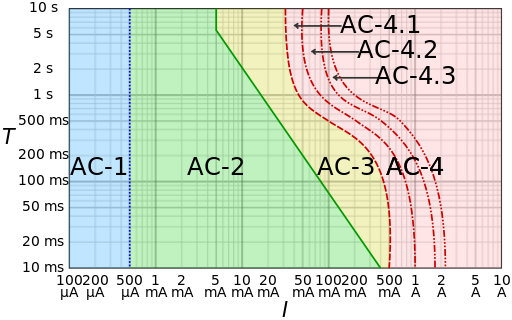 Table A is a log graph of the effect of alternating current “I” of duration “T” passing from left hand to feet as defined in IEC publication 60479-1.  The levels of shock are listed below:

The owner (widow), reportedly, was not notified of the potential hazard after the off-peak meter was removed by the utility company.  Further, a brother-in-law also stated he was not notified that a potential danger existed after the off-peak meter was disconnected at his residence, although his water heater was connected correctly at the time of this study.  Also, no indication existed that the remodeling contractor had an electrical inspection of the new water heater (plumbers are not required to have an electrical inspection).  The National Electric Code[1] requires a white conductor to be re-identified as an ungrounded conductor by painting or other effective means (such as electrical tape), if it is used for an energized conductor, at the terminations and at each location where the conductor is visible and accessible.  Identification shall encircle the conductor and shall be a color other than white, gray, or green.  The white conductor was not properly marked and would have been assumed to be a grounded conductor.

Later, a local electrical inspector reported another near fatal accident in his area.  The inspector also reported that during a meeting with a state inspector, they determined that there were as many as 2,000 off-peak meter installations that could potentially create a shock or electrocution hazard in that area.

If you have or know someone that has a similar meter arrangement, Donan recommends having a licensed electrician inspect your installation.

Gary Woodall joined Donan in 2000 as a forensic engineer based out of the firm’s Indianapolis, Indiana office. His areas of expertise include power distribution, building and house wiring, appliance-related fires, and lightning damage to structures and appliances, among others. Mr. Woodall commonly completes a wide range of projects at Donan including fire investigations related to electrical wiring and appliance failures; fire investigations involving stainless steel tubing (CSST) damage by lightning; lightning damage to appliances, electronics, and HVAC systems; product failures; general appliance failures, and others. He is a licensed professional engineer in California, Illinois, Indiana, Kentucky, Nebraska, New Jersey and Ohio. He is also a Certified Fire & Explosion Investigator. He earned his Bachelor’s degree in Electrical Engineering from Purdue University. Read his full professional profile here.