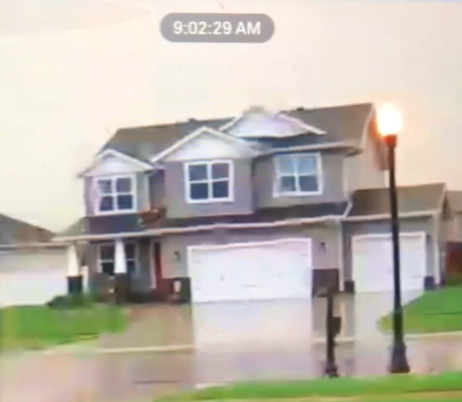 This house was struck by lightning on Saturday, June 16, 2018. The strike was caught on video by a neighbor recording the lightning display in the southern skies of Fargo, North Dakota.  Surprisingly, voices could be heard on the video soundtrack, but no thunderclap was recorded.  The vinyl-sided house faces north, and the evidence and video confirm the strike to east-facing metal fascia near the roof ridge cap.  Although Fargo is in an area that is notoriously flat, this two-story house was the highest structure in the immediate vicinity.  All four residents were home during the strike and were startled by flying pieces of light switch and duplex covers that were propelled up to 8 feet into opposing walls.  This prudent homeowner had installed local surge suppressors to his home theater projector, sound system, electric piano, and most of the home electronics equipment.  The surge suppressors were no longer functional after the event, but they prevented damage to the expensive equipment.  The unprotected microwave, refrigerator, sump pump, and wireless router were not as fortunate and showed evidence of high-voltage surge damage. 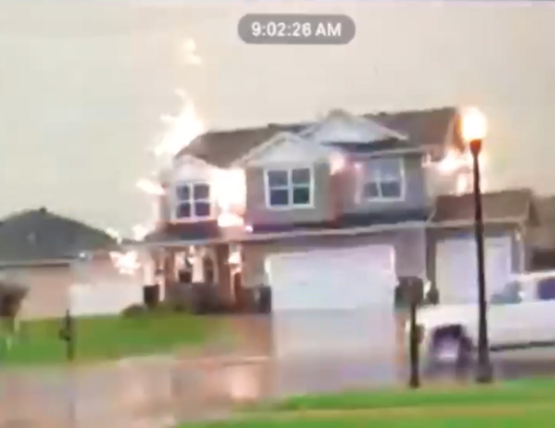 A split second after the initial strike, traces of the strike were visible above the east ridge cap, and light emissions were visible across the front of the house in the vicinity of the metal gutters, downspouts, fascia, and front-entry porch soffit.  Notice the flames beginning to show on the front porch shingles, directly above the grounded porch light. Discolorations of those building materials were observed during the site study on June 22, 2018.

For a few seconds, the dimensional-style, fiberglass-mat asphalt shingles above the porch light were ignited by the electric arc descending to the grounded porch light from the downspout.  Removal of the metal soffit and the light fixture showed no discoloration to the underside of the roof sheathing.  The energy transferred to the shingles was sufficient to create a fireball above the porch light for a very brief but intense few seconds.

Approximately two seconds after the lightning strike, the remnants of the porch roof shingle fire are rapidly diminishing, and the house has minimal changes in outwards appearance.  The fire department responded quickly to the event and after determining that fire concerns had been addressed, the house was vacated until the impact to the electrical system could be studied.

This case study is a great example of the effect of contemporary grounding systems.  The electrical charges in the ground surrounding the house were transferred to the house electrical ground grid all the way to the porch light and second-floor master bathroom.  These opposing charges provided an entrance for the lightning arc to transmit a high-voltage current into the house’s electrical system. This event and the resulting case study have completely convinced me to protect all of my electronics  with surge suppressors, and I look forward to the conversion of my circuit breakers to individual branch and incoming power surge suppression devices.  It is an inconvenient expense, but it is a prudent improvement in the prevention of damage due to high-voltage events, by lightning or by electrical company power fluctuations.

Hungry for more? Attend an upcoming webinar or view other resources at donanuniversity.com.

In 1977, while working as a research engineer for Cargill, Lee Dirkzwager, P.E., led the research on spark-induced explosions that resulted in a paper he presented at the First International Symposium on Grain Dust Explosions in St. Louis, Missouri.  In 1978, Mr. Dirkzwager moved into management as a Plant Engineer for a lead smelter in Texas and commissioning Project Manager for a lead smelter built in Los Angeles.  After receiving his Professional Engineering license in 1983, Mr. Dirkzwager formed the consulting engineering company, Pyro Engineering, and has served industrial clientele in the areas of combustion, mechanical engineering, electrical controls engineering and automation programming for a variety of industries including chemical production, materials handling, and food processing.  He has focused on the oil and gas and biofuels industries since 2006, and has led the development of over one hundred industrial control systems since 1981.  Mr. Dirkzwager has participated in many fire investigations during his career and now is a part of Donan’s forensic engineering team.