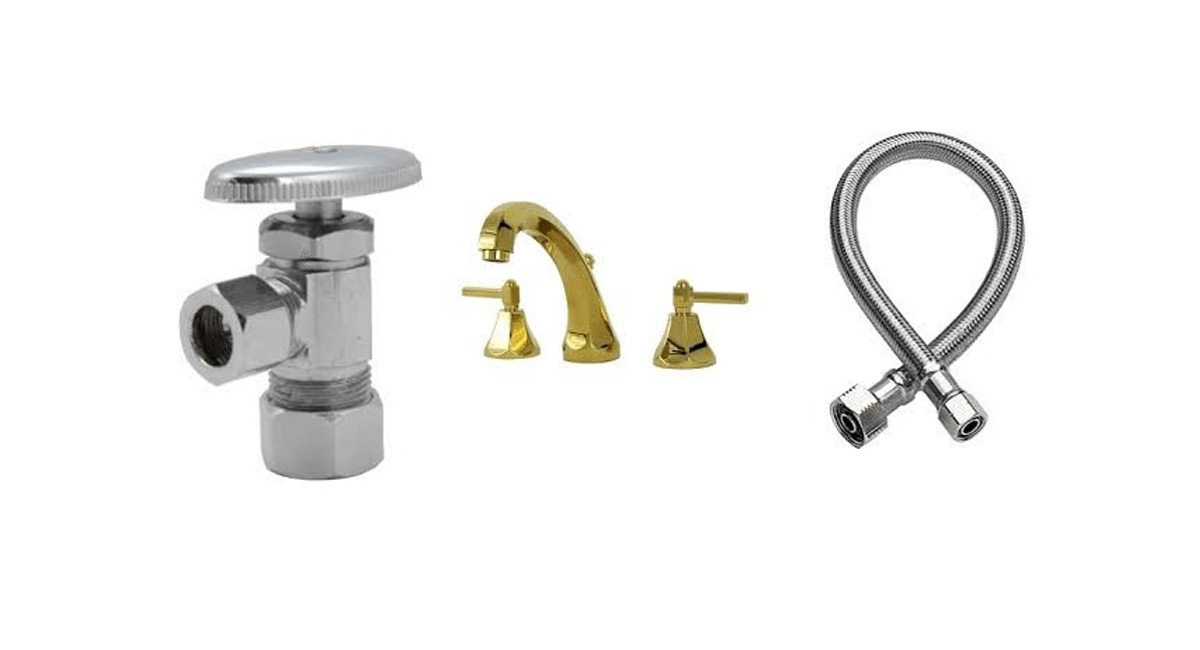 Brass failures commonly occur with plumbing components used in the supply of domestic water in residential, commercial, and industrial applications.  The mechanical failure of these brass components is often misdiagnosed or misunderstood by many who attempt to identify the source of the failure.  To more thoroughly and accurately diagnose the cause of a brass failure, it is important to understand the formulation and the proper application of brass.

Historically, the use of brass began approximately 5,000 years ago.  It is widely accepted that brass was discovered accidentally thorough the smelting of natural copper ores that contained elevated levels of zinc.  From this accidental smelting, a crude “brass-like” alloy was created.  It wasn’t until about 2,000 years later that the Romans refined a process in which they intentionally formed and fabricated various brass components.  In its infancy, brass was relegated to ornamental use and coinage; however, over time, it was discovered that there were many advantages to using brass in other applications.

Despite these many advantages, there are also pitfalls that can occur with the use of brass components in domestic water applications.  These disadvantages need to be addressed and, whenever possible, avoided through the proper use and design of the brass component.

Brass is classified as a binary alloy, meaning its principle structure, excluding impurities, consists of two general elements; in the case of brass, the two primary elements are copper and zinc.  Ancillary elements such as tin, lead, arsenic, etc., can also be found in brass alloys.  In the United States, brass is typically classified according to the Unified Numbering System (UNS).  The UNS uses five digits to describe a type of brass relative to its composition.  An example of a brass commonly used in domestic water applications is UNS C36000, which consists of approximately 61.5% copper utilization in the alloy structure.  Historically, brass has been generically classified as either red brass (with a copper to zinc ratio of 85/15) or yellow brass (with a copper to zinc ratio of 60/40).  The generic classification stems from the residual color of the brass, as the brass with the higher copper content will have a reddish exterior color, while the higher zinc content will have a bright yellowish exterior color.

Dezincification is a time-dependent failure mode that, in essence, occurs from the “dealloying” of brass over time when exposed to domestic, chlorinated water.  Primarily occurring in brass alloys containing a high zinc to copper ratio, dezincification can occur as the zinc used in the alloy begins to “dissolve” from its exposure to chlorinated water.  Over time, as the zinc is removed from the alloy, a sponge-like copper material remains.  The mechanical strength of the alloy is greatly reduced from the dezincification and ultimately results in a failure of the brass alloy as it is exposed to the normal stresses associated with its use with domestic water. 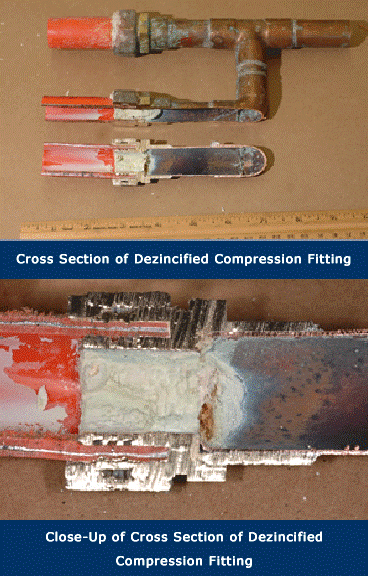 Dezincification failures are common with domestic water supply systems.  For example, over the last 10 to 15 years, failures of this type have commonly been found in water distribution systems, such as fittings used with cross-linked polyethylene (PEX) tubing.  Often, these PEX brass fittings are constructed of yellow brass, which consists of elevated zinc levels in the range of 38 to 45%.  The high zinc content of the fittings, combined with the environment that the fittings are exposed to (domestic, chlorinated water), ultimately leads to their failure in the form of a fracture.  PEX brass fitting failures related to dezincification are easily identified by the dark red color found along their fracture surfaces and by the jagged, brittle nature of the fracture.  Pitting and pockmarking on the interior surface of the failed fitting can also be found.

Stress corrosion cracking (SCC) is a failure mode that occurs with brass alloys under certain conditions.  SCC differs from dezincification in that it is not as much of a time-dependent failure mode, but rather a situation-specific failure mode.  It is accepted that three simultaneous conditions must exist for SCC to occur:

Testing has shown that brass components used in domestic water applications can fracture and fail as a result of SCC.  The removal or reduction of any one of the above three conditions can significantly minimize or stop the progression of SCC in brass alloys; therefore, it is important to fully understand the application in which the brass component will be used. 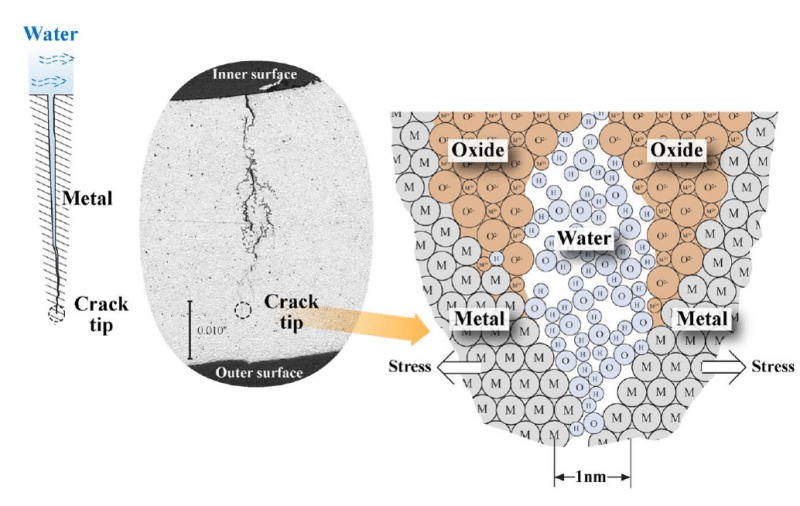 Recent SCC failures have been found on brass end fittings used in stainless steel supply lines attached to residential sinks and other residential fixtures.  These failures have been found to occur as recent as within weeks of the supply lines being installed.  Consistently, the failure mode of these supply lines has been identified as SCC given the failure mode and conditions that existed at their time of failure.  The three conditions required for SCC to occur were present at the time the supply lines failed and were identified as follows:

Multiple standards and specifications address the risks associated with the use of brass components in domestic water applications; however, no standard explicitly prohibits the use of yellow/high-zinc brass.  In a bulletin released in 2010, the National Sanitation Foundation (NSF) addressed the issue of SCC and dezincification.  In the bulletin, NSF stated, “Copper alloys containing more than 15% zinc by weight may become susceptible to failure due to either dezincification or stress corrosion cracking.”  As a result, NSF added two additional requirements to NSF Standard 14-2009, including an additional test for dezincification resistance and an additional test for SCC resistance.  Manufacturers of copper alloy fittings were advised of these changes in the Standard and given until January 1, 2011, to make the necessary changes for compliance.  Similar standards and recommendations from other industry-recognized organizations, such as the American Society of Mechanical Engineers (ASME) and/or the American Society of Sanitary Engineers (ASSE), indicate that a level of zinc not exceed 15% for various copper alloys used in potable water applications.