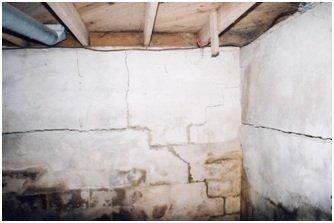 Every year, Donan Engineering is asked to look at dozens of basement walls that have failed. A wall is determined to have “failed” when the structural integrity is compromised – such as with the development of a horizontal or vertical crack. For purposes of this article, the wall discussed is presumed to be constructed of “block” (concrete masonry units or CMUs). In modern construction, builders are frequently constructing basement walls from poured concrete. This is a different story.

The crack shown here developed years prior to our study and has opened significantly. In other cases, the crack may be thinner, but will be well defined and will follow the same pattern.

The failure at the time of Donan’s study may be in its incipient stage or have failed catastrophically. In most cases, there is a recent environmental event which is believed to be the cause of the failure. We have found that some walls fail after a hard rainstorm, but particularly after a sustained drought. Typically, the failure is not from hydrostatic pressure, but from the soil re-expanding, or sloughing into an annular space created by the drought-shrunken soils. The effects of water cannot be discounted, however, since poor surface water control allows the earth adjacent to the basement wall to become saturated.

In almost every case Donan’s engineers have found that any recent influence is simply incidental and that the initial failure occurred well prior to the storm/drought/earthquake/sunspot, etc.

In other cases, the failure is believed to have been caused by a heavy vehicle that was forced to pass close to the house – perhaps to 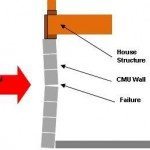 deliver goods, or for other reasons. A basic tenant of soil mechanics holds that a “cone of influence” extends outward and downward from any force at about a 45-degree angle from vertical. For example, the vehicle would have to be within about 8 feet of the wall to influence an 8-foot tall basement wall (note that there also are other factors which our engineers consider when making such determinations).

In simple terms, a basement wall fails when the pressure of the soil exceeds the lateral strength of the wall. As shown in the sketch, the wall is held in place at the top by the first floor framing and at the bottom by the basement floor slab. In engineering terms, the wall is a vertical beam restrained at the top and bottom. CMU walls are strong vertically, but weak horizontally. The central portion of the wall is not strong enough to withstand the horizontal soil pressure against it and, as a result, failed walls bow inward, creating the cracks discussed above.

(Code) reflects the typical code and was used as a reference for this article. The typical failed basement wall we study is comprised of 8-inch-thick block. The Code indicates that such construction can only be used in walls no higher than 7 feet with no more than 4 feet of “unbalanced fill” unless special construction techniques are used. Unbalanced fill is simply the height of fill against the outside of the basement wall. To raise the fill to 7 feet, the wall would need to be constructed of 10- to 12-inch-thick blocks, and even then, only in certain soils.

Walls can be successfully constructed if they are properly reinforced with steel and grout. For example, an 8-foot-tall wall can be backfilled 7 feet when it’s fully grouted.

(Note that the statements above are to be considered general and not applicable in all situations.)